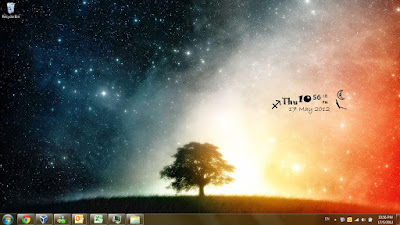 After some years, remember the initial version that was released back then in year 2009 during Campus time, it was a clock that heavily modified based on a clock from other submission in Customize.org, and thus born the CuteClock that purely to decorate my desktop,
(back then I was using the Windows XP with a Pentium III)

and now after several years, where it continues to run on my desktop, and changing it, updating it along the years, and recommend it to friends around.. this is the latest release 2.5 (which was made on my laptop that running Windows 7 , Intel Core i5)

(Display as Moon during night time)

(Display as Sun during Day time)

Interested in getting such as 'Gadget' ? , aka a skin for rainmeter and running on your desktop? Grab the download copy from the following site: