There is this GoMobile Expo in KLCC (Kuala Lumpur Convention Centre)  during 12-14 November 2010.

The section of the Expo showing the history of phone, and phone models of the past, is rather small. Well, it is interesting to get the chance to see the phone used in the old days.
There is one phone that caught my attention is the water proof phone. (From what it was described).

Basically, it's a phone that was kept inside a steel box. It was said to be mount on the wall of transportation such as train in the old days, and well it adopt the rotary dial mechanism to make phone call.
a very classical rotary dial phone. I remembered I have used a rotary dial phone long time ago when I was studying in primary school, and my mummy whom was a teacher, teaches me how to dial using the phone.
On the other hand, if we type Ericsson, and search in Google nowadays, we could only get the picture of the modern mobile phone.
Never thought that I could get a chance to see this real Morse code machine. The first time I get to know about the existence of such device was from a science magazine for kids. It was illustrated in cartoon-like picture. Making up message via some dash and dot, (press and release makes a dot, via hold it longer makes a dash) has been something fascinating to me, in my childhood.
from its description:

Nokia's first mobile phone after its joint venture with Salora. This phone worked on the NMT 1G Network including ATUR  (011) in Malaysia.


Below are some pictures of other phones.. that I find interesting. 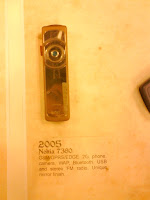 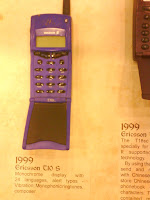 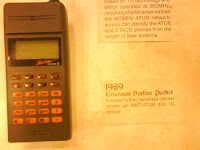 From the Left to the Right:


I remember my father used to have a mobile phone long time ago, like those bulky black colour phone. However, I only saw in few times in my childhood, hence couldn't identify it.. hmm..


Anyway, this is the last picture for this post.

Which this candlestick phone, looks much alike with those phone illustrated in the cartoons that I watched in my childhood time. :D
at 2:12 PM